Three Key Things Startup Labs Should Look Out For

Three Key Things Startup Labs Should Look Out For

Starting up a biotech company, being part of the early stages at an R&D lab, or launching a clinical or pharmaceutical lab that could change the world…Starting a lab is an exciting time, but unfortunately, it's often an expensive time as well.

The last thing a lab needs when getting off the ground is an equipment failure, environmental setbacks, or people problems that could impact the hard work being done by researchers, scientists, and lab technicians.

This is why the first thing an early-stage lab needs is a system that helps protect equipment and facilities from minor setbacks, catastrophic failures, and everything in between. They need a means of monitoring that ensures the safety and efficacy of all resources and concurrently enables staff to focus on the projects that build the business.

Let's explore two features in the lab that require specific types of monitoring – equipment and environment – and explore the role your team may play (or not play) in ensuring a lab moves from getting up on its feet to hitting the ground running.

1. A Lab Starting Out: Only as Practical as its Equipment 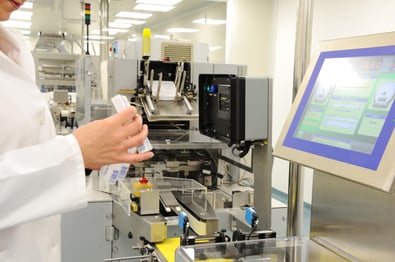 Before a new lab opens its doors, the heavy lifting has usually been literally and figuratively done – getting the right equipment in place.

Lab equipment is often the most significant expense in getting started (even if it's used lab equipment). While the layperson envisions test tubes and beakers, today's lab manager typically requires highly calibrated equipment like sequencers, centrifuges, cryotanks, incubators, and more.

Some of this equipment needs to be up-and-running 24/7, a challenge for the most extensive labs, let alone smaller startups. It's impractical to have staff on-site 24/7, so the solution for these labs is monitoring. At the very least, they need dry contact alarms for their basic monitoring, and higher-grade sensors collecting and reporting temperature data for critical equipment.

In most cases, it's also impractical for a lab manager to build this monitoring system themselves as 1) they likely have neither the time nor expertise, and 2) they may create more significant headaches for themselves down the road as labs scale up. With more equipment, more sensors, and more data to collect, a manager may come to spend more time working on a lab equipment monitoring system than on the actual work of the lab.

A connected monitoring system is critical to ensure that equipment is secure and securely operating. The design should be able to report usage metrics automatically and feed them into a centralized platform that can generate reports and alerts.

The alternative is often independent sensors on equipment from which data must be gathered manually, which – as with the preceding – is often impractical for an early-stage lab (or ANY lab). In this case, it's not just about the time it would take to execute manually but also the fact that a manager rarely gets real-time data.

Imagine the scenario of going to work Monday morning and seeing that an incubator failed Friday night. With a continuous, automated monitoring system feeding data into a centralized system and capable of sending alerts, a lab manager would know immediately of any equipment failures or mishaps.

But equipment efficacy is only part of the equation: a lab's environment plays an equally critical role.

2. A Challenge Startups and Established Labs Share: The Environment.

A biotech or pharmaceutical company rarely chooses any old space to place its lab. Instead, the facilities selected are often explicitly built for the needs of such companies – especially early-stage labs that need to start up quickly.

And while such facilities are well-versed in a lab's general environmental control needs, they typically don't deal with specifics. E.g., they'll have sensors for relative humidity and air temperature, but usually "off the rack," which may make them useless as far as a particular lab's needs go. Simply put, a lab's environmental control needs are too specific to trust general temperature and humidity sensors.

When you add that, in most cases, an early-stage lab doesn't have centralized control over its facility's HVAC systems (as they're often renting lab space in a larger facility), an independent monitoring system becomes crucial. For example, facility landlords often turn off the AC at night because people aren't in the building - causing equipment to work harder, and the temperature to further increase.

Installing the same kind of automated system for the environment as for the equipment is an important safety net for labs of all sizes. And now for what's often the cause and solution to most of an early-stage lab's issues: the people.

3. People Are Not the Problem… Or Shouldn't Be

There's one thing that all employees do at startup and early-stage labs: wear many, many different hats.

While this can sometimes be a good thing in terms of employee engagement, it can expose some pretty big vulnerabilities in ensuring the proper function of all equipment and air quality in the lab environment.

Take, for example, a simple cooling unit in which research materials are stored. It could be opened multiple times within an hour by various people, and – as no one is specifically assigned to ensure its operability – its temperature drops, and materials are ruined.

Or even a door leading into research areas. People multitask, passing through, unknowingly leaving it open just a crack, or carrying contaminating particles on their clothing… it all leads to poor air quality in a lab, which can lead to loss of any given project.

But the people are not the problem: it's the process and the lack of a platform. With proper SOPs and a monitoring platform, cooling unit temperatures can be more easily maintained, air quality can be better preserved, and people multitasking every day will have less to worry about.

There's far too much at stake in every biotech, clinical, and R&D lab to entrust equipment and environment monitoring to a DIY approach. It's a complicated critical process that requires dedicated resources and expertise.

At XiltriX, we do one thing: life science monitoring. With 30+ years of experience in the space, no one is better at delivering a custom monitoring service that protects your work and frees your team up to focus on what they do best.

We're proud to serve some of the most extensive labs out there, but even more so to support early-stage and startup labs because we know it's often in those labs where the boundaries are being pushed, where the work of tomorrow is being done today.

Our job is to ensure the equipment, people, and places tied to that work are running cleanly and completely. Learn about equipping your lab with a custom monitoring service. Contact us now: